Keep it simple – if there are several relationships in the data and they are not well represented using one chart, separate the data into several charts.

The chart should not feel separate from the main content (article or bulletin).

Use the same font type and size for charts as the body font in the surrounding text.

Example of chart with smaller font than surrounding text

Example of chart with larger font than surrounding text

The maximum number of lines plotted on a chart depends on how similar or different the data are and what you want to highlight.

You need to make sure that each line is easily distinguished from the others.

Example of chart with difficult to distinguish lines and colours

Use small multiples if it is difficult to distinguish between the plot lines of four or more similar data sets. Use the same scale for all charts when comparing two or more data series.

A singular time series of interest can also be highlighted, with all other data sets toned down.

Use a slope chart to highlight changes between selected years. The granularity of the data is not evident, however trends are easily noticed.

Example of a slope chart

Use gridlines sparingly. There should usually be between four and eight gridlines per chart, depending on the size of the chart and the level of data. They should provide enough reference points to read the data values in the chart easily.

Do not use too many or too few gridlines.

Example of too many gridlines

Example of too few gridlines

Example of correct number of gridlines

Choose sensible and easy to read and follow gridline intervals.

Example of incorrect use of gridline colour

A standard bar chart should have gaps between bars that are slightly narrower than the bars. The exceptions to this are the exception of histograms and clustered bar charts.

Example of correct use of gaps between bars

A clustered bar chart should have gaps between the clusters that are slightly wider than a single bar.

Example of correct use of gaps between clustered bars

Do not use borders and backgrounds for charts.

Example of an inaccessible chart with a background and border 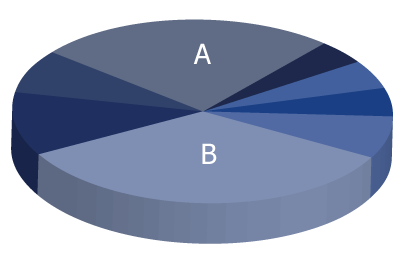